A Night Out With Fall Down Gallery, Jason Mullins and Deejay NDN

Fall Down Gallery was the place to be on Sunday night. Robbie and Tarek, owners of Ottawa’s newest addition to the independent art and skate scene have been doing a killer job of entertaining the locals by hosting a slew of events that feature established as well as up and coming talent from the Nation’s Capitol. This weekend was no different as they sent out word, inviting everyone to check out featured artist and friend of ATCR Jason Mullins. Jason has been a contributor to the local NDN community here for a while, you can find him over the summer months working at Aboriginal Experiences using performance and story telling as a modernized way of getting our traditional teachings out there. Now, through the winter months he has been using natural mediums such as feathers and driftwood from Ottawa’s shores to put together statement art pieces. I almost want to call them bouquets but that doesn’t quite do them justice, his artwork is bright and entertaining and definitely one of a kind and on Sunday he got to show it off to friends and fam who were verrry impressed. Alongside to keep the night going was DollsandDems working on a live art piece and Deejay NDN to keep the beats coming. 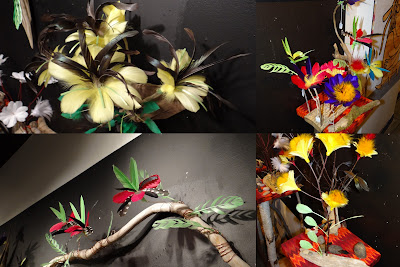 ﻿ ﻿﻿ HyfGypsySun and PrufRock closed the night with an amazing spoken word performance, it was really something to be heard. It seems as though them guys had rhymes for days and I hope I can catch them at the next Capital Slam Night at Mercury, or maybe at another Fall Down event. Big ups to everyone that came out and to Fall Down Gallery for bringing everyone together to experience a night that wouldn’t have been found anywhere else in Ottawa, we are looking forward to the next one! Shout out to Darren Sutherland for the photos, he’s got our back.